Are All UPS Systems Created Equal?

When the lights go out, we often rely on Uninterruptible Power Supply (UPS) or “battery backup” systems to keep our computers running. From small and inexpensive home or office units to multi-megawatt data centre installations, these systems all perform the same basic task; they use batteries to supply power to computers and other IT equipment for brief periods when utility power is down. But that’s where the similarity ends - there are some important differences between consumer and enterprise UPS systems.

Before we examine the differences, let’s start by covering the key components that all UPS systems, large and small, have in common: batteries, battery chargers, and the inverter.

The batteries, of course, are the most obvious component. UPS battery technology has not changed much over the years and most are still using some variation of the lead-acid battery.  Small systems use “gel cell” type Valve Regulated Lead Acid (VRLA) batteries while larger systems use deep-cycle Absorbent Glass Mat (AGM) or traditional flooded lead-acid cells.

All UPS systems need battery chargers of some sort. Smaller UPS systems often use very simple charger designs, which are slow to charge and can lead to premature battery failure.  Larger and more expensive systems use sophisticated multi-stage chargers, which can charge quickly while still ensuring long battery life.

The inverter is the component that makes the UPS possible; it converts low voltage DC power from the batteries to the higher voltage AC power required by IT equipment. Inverter topologies vary greatly in efficiency and power quality, but all do the same basic job of converting DC to AC.

Now that we know what all UPS systems have in common, what is it that separates a data centre UPS from its smaller in-rack or home office cousins? The key lies in the topology of the UPS components.

The smallest and least expensive UPS systems are usually “standby” designs where the IT equipment load is normally powered by utility power (with filtering and surge suppression). Only in the event of a power failure is the load powered by inverter, using the batteries. This topology is the simplest and least expensive, but it does not provide much protection from poor utility power quality and is relatively slow to switch to battery power.

Next up is the “line-interactive” topology. This mid-range design has the inverter in-line with the load as opposed to the “standby” design where the inverter is only switched in during a power failure. This allows the inverter to interact with the utility power in order to correct limited voltage fluctuations. It's an efficient design with a low component count, however it does not easily scale to larger sizes. It also requires frequent switching to battery power to deal with larger utility power fluctuations, which can shorten battery life. 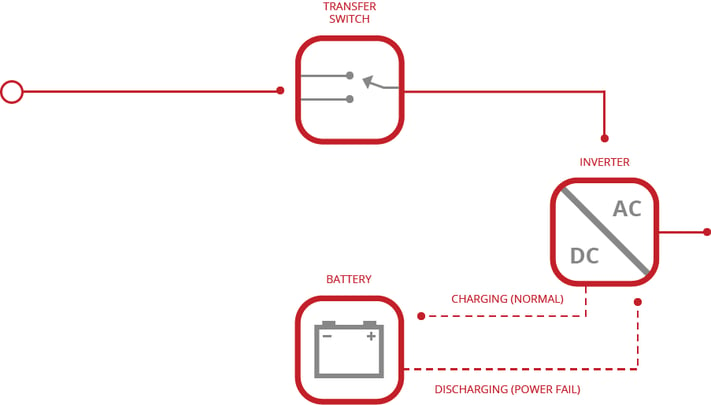 UPS systems larger than 5 KVA typically use a “double conversion on-line” topology, which is the most complex and capable of the three common designs. These systems first convert the utility power from AC to DC in a process known as rectification. This DC bus then continuously powers the inverter, as well as a battery charger. This conversion from AC to DC to AC is the where the “double conversion” part of the name comes from, while the “on-line” part comes from the fact that the inverter is always on-line and powering the load. 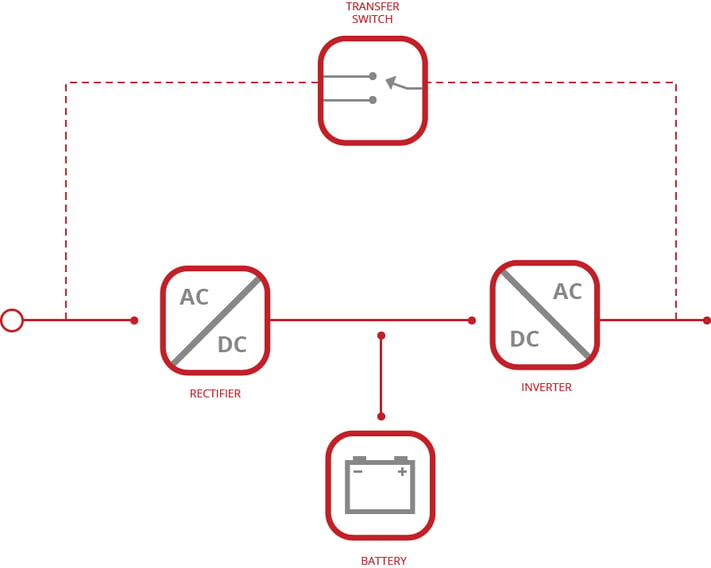 The advantage of the “double conversion on-line” topology is that the IT loads are never exposed to utility power. The output of the UPS system is completely clean, finely controlled power that has been generated internally by the UPS system from its DC bus. This pristine source of power is akin to a private utility for the exclusive use of your IT gear.

So, to sum up, although all UPS systems large and small contain similar building blocks, the complexity of the topology varies greatly between smaller in-rack units and large data centre installations. Running your gear in a colocation facility with double conversion on-line UPS technology ensures the highest power quality for a reliable IT environment.

How Much Power Do You Really Need?

Data Centre Efficiency: Keeps Your Costs Down and Helps Fight Climate Change Too!