IT Basics Part 1: What Is a Network?

A network, in its most basic sense, is just a collection of things that can communicate with each other.

In the IT world, networks exist to exchange information between individual devices, or “nodes”. This could be as simple as two devices directly connected to each other (we call this a Point-to-Point network) or it could be hundreds or thousands of devices connected with various switches and routers.

Much like onions (and ogres), data networks have multiple layers. They’re usually constructed using the Open Systems Interconnection or OSI model which is made up of 7 different layers.

Why so many layers, you ask? Because we IT people love abstraction. We like to build things out of pieces that are as generalized as possible, so that we can re-use the same pieces many times over without having to re-invent the wheel.

The outermost layer (layer 1, or the physical layer) deals with, logically enough, the physical connection – the materials (or “media”) that we use to transmit the data, and the associated electrical or optical signaling that moves the information over the media. This layer determines how fast and how far we can move the data between two directly connected devices.

Once we’ve determined the characteristics of the physical layer, we can build other logical layers on top of this foundation for other specific purposes. Layer 2 (the data link layer) deals with direct communication between nodes connected to the physical network while layer 3 (the network layer) deals with logical addressing and routing that allow us to build larger interconnected networks. We call these first three layers the “media layers” and they form the underlying infrastructure of the network. Layers 4 through 7 are known as the “host layers” and are higher level software layers which deal with reliability, sessions, and ultimately the application-layer protocols that we interact with (such as HTTP for viewing web pages). 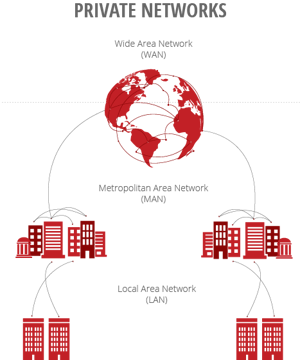 Networks can be divided into a few rough categories based on their geographical scope. You may have heard the terms LAN and WAN; the former usually refers to a network that is constrained to a single home or building (a Local Area Network) while the latter is a Wide Area Network that might connect several branch offices of a company located in different cities.

Both are examples of private networks (as opposed to the Internet, which is a public network). Another relative newcomer to the list of acronyms is the Metro Area Network (MAN) which connects multiple locations in the same city.

We can also build networks on top of other networks. For example, it’s quite common to build a private WAN on top of the public Internet using VPN technology which uses encryption and encapsulation (more layers!) to create, exactly as the acronym suggests, a Virtual Private Network. 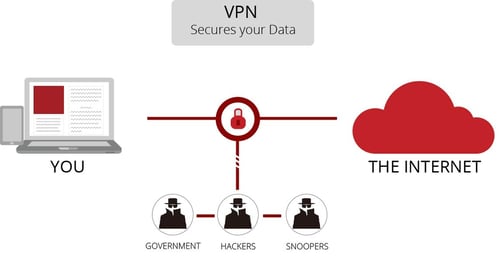 Networks can be as simple as two computers connected to each other with a single cable, or as complex as the Internet, which is home to more than a billion connected devices with well over three quarters of a million different routes between them (and growing every day).

Here at Whipcord we manage many different networks within our data centres, across the country, and in some cases between continents. Networking is, without a doubt, one of the most complex and fascinating aspects of IT.

Say Yes to The Cloud This Valentine’s Day