Route Optimization: Picking the Best Tube for Your Traffic

You may have heard the Internet described as “a network of networks”. This is in fact quite accurate. (Or perhaps “a series of tubes”, which, although not entirely inaccurate, is a whole different discussion.)

The routing protocol that allows us to navigate these interconnected networks is known as Border Gateway Protocol, or BGP. In BGP parlance, each of the individual networks that make up the Internet is known as an Autonomous System or AS.

Another key aspect of the Internet is resiliency. Individual networks often connect to several other networks, providing multiple different paths to any given destination. To reach a remote machine, BGP needs to determine which of several possible routes your traffic should take.

When it comes to these kinds of routing decisions, the BGP protocol is not particularly intelligent. The most efficient route, as far as BGP is concerned, will be the one that traverses the fewest number of Autonomous Systems. On the face of it, this would seem logical – after all, this is technically the shortest path, at least in terms of AS hops. But the size and complexity of an Autonomous System can vary significantly. Since each individual AS is a network of its own, it may have multiple hops that can potentially transit large geographical distances. It’s entirely possible that the most efficient route according to BGP could have your traffic bouncing across the continent multiple times.

The BGP protocol also doesn’t take into account the quality of a given route. Sometimes peering links between transit providers and Internet service providers can become congested, or individual routers can be overloaded. These kinds of conditions result in packet loss that will slow your connection down.

To help our Internet routers make more intelligent decisions, we’ve implemented a route optimization solution. This is a software product that actively tests each path to any given Internet destination and check its latency and packet loss. It can then determine which path is the fastest and highest quality, and let our routers know.

Our BGP route optimization allows us to pick the best routes available from our upstream providers in order to provide our customers with the lowest latency and packet loss, resulting in the fastest connections. In many cases, we’re able to detect and route around upstream outages or congestion. 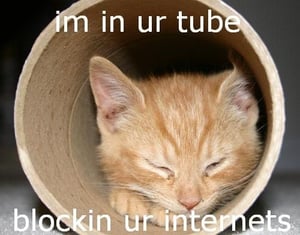 Of course, this won’t solve all Internet problems. For example, if there are problems on the end network you’re trying to reach it may not be possible to route traffic around the trouble spot. Also, there are occasionally issues of such a large scope that they may affect multiple routes.

So although we can’t fix all the Internet’s problems, our BGP route optimization system does ensure that all the cat GIFS arrive via the shortest tube.